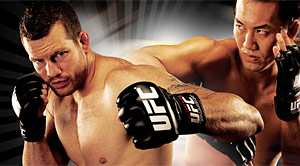 The UFC makes its return to Germany on November 13, 2010, where Nate Marquardt and Yushin Okami fight to get one step closer to a shot at the middleweight championship.

Nate Marquardt has gone 4-1 in his past five fights and is determined to notch another flashy win on his record when he faces Okami. To add even more pressure, Marquardt will yet again be fighting for a title shot, making it the third time in his career that he has been in this situation. Marquardt lost to Chael Sonnen in his last Number One contender fight.

Yushin Okami, on the other hand, has been quite a force since entering the UFC, boasting a very respectable 9-2 record. Okami has improved much since entering the UFC and Marquardt will have his hands full. Having beaten Anderson Silva in a different organization, Okami is optimistic that he will face him again, this time for the UFC Middleweight Championship (Okami needs to win and Silva will have to defend his belt against Vitor Belfort for this to happen).

The UFC is hoping that its second stint in Germany will be as successful as its first and as a result they have put together a fight card littered with fighters who want to make an impression. The fans will not be disappointed.

Here’s what the rest of the card looks like: