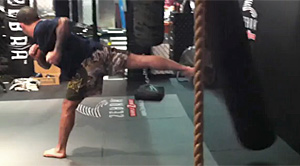 Joe Rogan, since 2002 after his start in the UFC as a sideline reporter back in 1997 (UFC 12), is known as the best color commentator in MMA. Not only is he cocky, but he also holds a black belt in Tae Kwon Do and a brown belt in Brazilian Jiu-Jitsu. He also gave GSP some tips on how to do a proper spinning back kick (skip video below to 3:53). When Carlos Mencia was accused by Rogan for stealing jokes and a viral video of them arguing over this was circulating the web, we kinda wished Rogan had performed his devastating one-kill kick instead of him running his mouth.