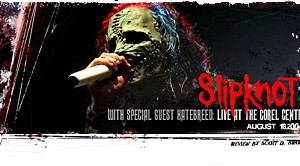 Suddenly the lights grow dim and the 4000 fans (approximately) are quick to applaud any hint of the band appearing on stage. Lighters are pulled from pockets and are lit making the stands look like an oversized church prayer room. The nine revolving spotlights at various places up front begin their movement and Slipknot hits the stage. The crowd goes nuts. The band is all wearing black jumpsuits and masks. The numbers identifying each member are there on their left shoulders. Taylor looks like a modern version of Leatherface (with a shock of red hair added) from the Texas Chainsaw Massacre and Jones adds to the horror film atmosphere by donning a pseudo Pinhead (from Hellraiser) mask. The spikes are thicker but the effect is the same.

The show is all aggression and energy. They play a set of songs from their new album (Vol. III: The Subliminal Verses) and some older stuff (from Iowa and before). Taylor is a master showman. He yells at the crowd between songs. The symbiotic relationship is akin to a dominatrix and her victim. The crowd does as it’s told and is rewarded with pounding music and guttural screams. At one point Taylor cajoles all 4000 participants onto their haunches and at the exact moment of his choice has them jump high in the air. The effect is colossal and meshes the crowd into one screaming and bounce mass.

The movement on stage is frenetic. Crahan and Fehn’s job, when not pounding on their drums, is to pump up the mob even more. The run around stage jump up on their drum kits and headbang to mass enthusiasm. At one point Crahan’s drum kit almost falls off stage with the frenzied activity. Speaking of Crahan, he is the upperclassman of the group (he wears a tie), he grabbed your humble narrator’s attention when he appeared on stage with a baseball bat. Using it to increase the power of a drum beat by imitating a Mcguire-like homerun swing against a beer keg attached to the side of his drum kit, Crahan gets my vote for the angriest man on stage.

Although Taylor is the obvious leader of this 9 member nu-metal band, he is not the main attraction. He does lead with his angry vocals, but at its heart, Slipknot is a throwback to the genesis of musical creation. They have a DJ, they use a bass and electric guitar, but the center of this band is their drums. They remind you of African tribesmen pounding on primitive drums dancing to the thumping beat created by their homemade instruments. Slipknot pounds out this type of music. They grab and hold you with their assaulting repetition. The mosh pit created by Hatebreed almost disappears as the drum beat does not inspire individual movement. You join everyone else in head banging and fist-pumping. You move in simple gestures. Anything more complicated than this throws you out of synch.

Taylor, after every few songs, leaves the stage. His effort to keep his voice as low and primitive as possible takes a toll on his vocal chords. He grabs bottled water and returns. After a swig he throws the bottle into the crowd giving the recipient a nice refreshment. He repeats this ritual all through the night keeping the fans close to the stage, who are packed-in like sardines, cool and attentive. Even with the accolades Taylor gives the crowd, such as being the quickest group to understand and complete the earlier jump sequence or being the most enthusiastic fans he has seen on the band’s present tour, it is the simple gesture of throwing out water to hot and thirsty fans that gives me the most respect for the lead singer.

Although I have read some bad press on Slipknot, the type of music they play is always open to criticism (see Limp Bizkit), and with the masks and jumpsuits you can see how they could be tagged as all show no substance, I would have to disagree with this assessment. The show is choreographed well. All 9 members perform their parts successfully. When a member needs to go off stage to retrieve a drum or baseball bat, he does it in a timely manner without any interruption to the music. The group members are all over the stage jumping around and head banging in unison, but they never miss returning to their instruments in time to play their part in the music. Since a live show doesn’t only include a fan’s use of his ears, a band must give the audience something to watch if they wish to have a great stage presence. Slipknot realizes this and plays not only a great musical set but also gives a great visual performance.

It comes to the end of the show and Taylor gets everyone to lift up their hands. He screams out, “Get your middle fingers in the fuckin’ air.” After the crowd has readily obliged, the music kicks in and Taylor gives his best performance of the night singing “Surfacing” off the band’s 1999 self-titled album. The band then leaves the stage only to return for a quick encore. After the song finishes, Jordison, Crahan, and Fehn throw their drumsticks into the crowd and the band leaves the stage to massive applause.

I exit the Corel Centre soon after and meet back up with Steve in the parking lot. We hit the Queensway and I mention to Steve that the change of uniform from orange to black was a good choice. Steve states that he got some great shots of the band and that the photos should look awesome on the site. We both agree that the show was entertaining and that the $35 dollar ticket price paid by fans was well worth the money.