“Chainsaw Kitty” Is the Hilarious, Must-See Music Video For The Upcoming Hell’s Kitty 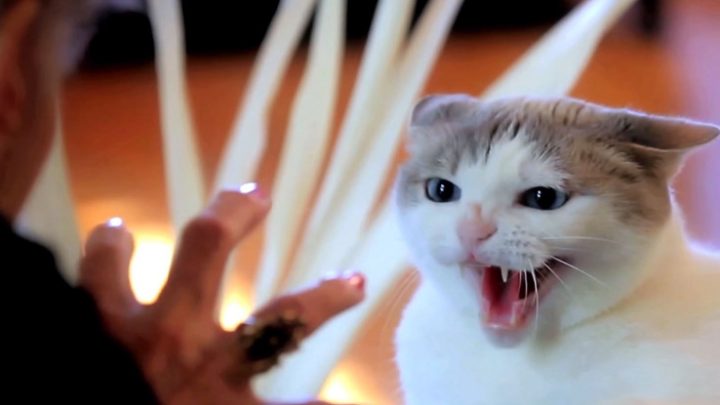 Ahead of the March digital and DVD release of the feature film, the filmmakers behind the new horror-comedy Hell’s Kitty have produced an exciting music video for their original song, “Chainsaw Kitty.”

Hell’s Kitty, the movie, is distributed by Wild Eye Releasing on VOD and DVD starting March 13, 2018. The “Chainsaw Kitty” music video was meant to reflect the often schizophrenic personality of the movie’s central antagonist — a supernatural, loving, but possessive cat named Angel. The song is currently available on Amazon and Spotify; soon to be available on iTunes. The music video contains clips from the film and is available to watch on this page.

Writer/director Nicholas Tana [Sticky: A (Self) Love Story], who also appears in the film, worked closely with Hell’s Kitty composer, Richard Albert (Losing Touch), to create music for the film that properly reflects the antagonist, Angel. Angel is a cute and loving cat with an evil, jealous side to her often onerous personality, both supernatural and schizophrenic. “Chainsaw Kitty” was written, performed, and recorded by Albert, with lyrics by Nicholas Tana. The song was originally intended for a scene with Lou Ferrigno (The Incredible Hulk), in which the cat’s claws turned into chainsaws. Though that particular scene was never shot, Tana and producer Denise Acosta loved the music enough to include it in another scene involving Ashley C. Williams (The Human Centipede) and Barbara Nedeljakova (Hostel), rocking out to it on all fours! The upcoming Hell’s Kitty soundtrack will be released after the movie is distributed. Appearing on the soundtrack is the Hell’s Kitty theme song, “My Pussy’s Possessed,” which is used as the central score throughout the film.

Tana commented on the theme song:

’My Pussy’s Possessed’ was inspired by my love of the whimsical, haunting compositional style of Danny Elfman, those quirky but memorable Meow Mix commercials from the late 7’0s, and the stirring flying Monkey chants from The Wizard of Oz.

The music for the soundtrack was created as an international collaboration between Tana, who lives in the United States, and Albert, from Germany. Tana wrote most of the lyrics for the songs, as well as some of the melody lines and chord progressions. Albert produced, mastered, and contributed the music, and vocals, for every song.

Albert said of the music:

The choice of musical styles available on the soundtrack is meant to reflect the bizarre and twisted taste of the movie’s main antagonist, Angel, a fiery hell cat with a penchant for ear-shattering rock songs, and a weakness for cheesy ‘80s love songs.

The CATchy combination of rock, death metal, and (even) cheesy love songs, which the album contains, is enough to fulfill nine lives, and have you dancing so hard, you may not always land on your feet.

Also featured on the Hell’s Kitty soundtrack is Brian Adamz, and Down Below, and the pop opera song, “Tonight You’re All I Need,” performed by Hermano Blanco (Nicaragua), produced by Richard Albert, with lyrics written by Nicholas Tana.