UFC 212: Max Holloway Won’t Be Begging For A Rematch With Conor McGregor 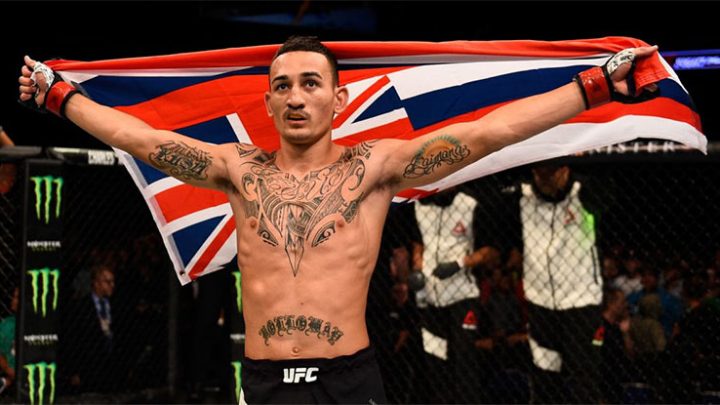 UFC 212 is now in the books! Max Holloway is the official UFC featherweight champion. In last night’s title unification bout, Holloway defeated the former reigning kingpin by TKO in the 3rd round after a back and forth battle in Brazil.

Holloway, 25, is the youngest UFC star to have 11 straight wins and now, with the belt around his waist there’s so much more opportunities open for the Hawaiian born fighter. The doors are open to a fight with Frankie Edgar or Cub Swanson next, but also a rematch with Conor McGregor, if the Irish sensation ever decides to return to featherweight.

During the UFC 212 post fight presser, Holloway was asked about a potential match up with McGregor in the not too distant future.

If he wants to come back down, he can come and get it. But if not, it is what it is, you know?

That guy was the 2015 champ. He can go running around wherever he’s at with the belt and celebrate, but guess what? You can’t take that away from him here. This is called the year 2017 right now, he’s the 2015 champ, and I’m the champ.

But it doesn’t sound like the champ is going to be begging for that fight anytime soon.

This guy’s over here always trying to look for the bigger thing and that’s him. Good for him. I ain’t going to chase someone around. I ain’t going to talk about someone that ain’t talking about me. He gets to choose his fights. Why am I going to cry and beg him to fight me? Get the hell out of here with that sh*t. He can beg to fight me now.

I’m coming to that point now where people’s going to start asking me to fight. I ain’t asking no one to fight. I’ve got my throne. If you want it, come see me.