Darkest Hour Gets A Limited-Release Beer! 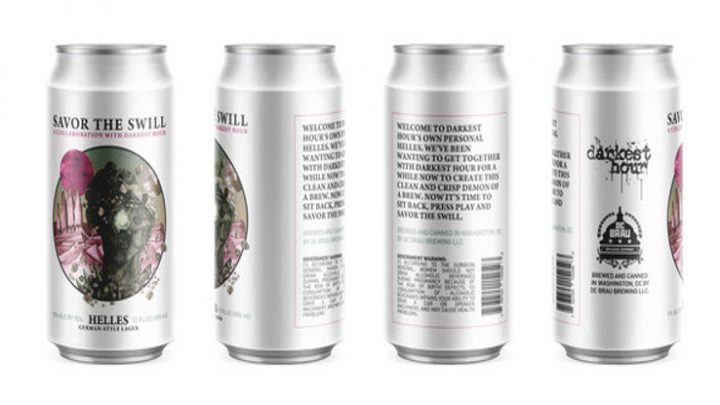 Metal fans will have a new beer to savor when Darkest Hour hits town in February. In honor of the band’s 20th anniversary and release of their ninth studio album, Godless Prophets & The Migrant Flora, the band teamed up with DC’s own DC Brau Brewing Company for a collaboration they’ve titled Savor the Swill, a German-style Helles lager, that will be available in limited release starting February 11th, in Washington, D.C.

This project was born a few years back. It may have taken some time for it to come to fruition, but it was worth it.

DC Brau’s co-founder/head brewer Jeff Hancock and Skall worked with the band to choose a style they would enjoy drinking. Hancock said:

There was one obvious choice that rose to the top after discussing the many potential beer styles that we could brew -– a German-style Helles. I mean, how fitting is it to choose a beer with the word ‘hell’ in the name? Cha Ching!

OK, that last bit about the word “hell” is just silly, because, well, as we all know, all heavy metal is so pure evil, right?

Savor the Swill is a light, golden German lager with lively, natural carbonation that touts aromas of lightly kilned malt, grain, and cracker with a subtle herbal hop presence. A clean fermentation profile, low alcohol content (5% ABV), and a perfect ratio between the Czech Republic 2 Row Pilsner malt and Hallertau Mittelfrüh hops contribute to this well-balanced, meticulously crafted, domestic interpretation of one of Germany’s most delicate and sought after lagers. Almost any DC Brau beer pairs with a metal/punk rock show nicely. We’ve been drinkers of the Brau for a while now, but after getting to know their staff as well as the community that surrounds DC Brau, there is no question this feels like home, it is an honor to partner [with] them. Their dedication to the DIY business community, Washington D.C. at large, their neighborhood, their employees, the local music scene, and, of course, the enjoyers of the beer they produce has shown through bright and clear as we have worked with them. So cheers, raise your glasses, mugs, plastic cups, chilled aluminum cans, or whatever [the] hell you’re drinking beer out of. Here is a little something for your taste buds while you jam this new album and get you powered up for the circle pit when we come to town!

The beer will make its debut in the tasting room on Saturday, February 11th, on draft and in can. The band members will be on site for a special meet-and-greet during growler hours. Fans should also make plans to be at the Black Cat for their D.C. show on Friday, February 17th, at 8 p.m., where Savor the Swill will also be pouring. Tickets for the show can be purchased via Ticketfly.