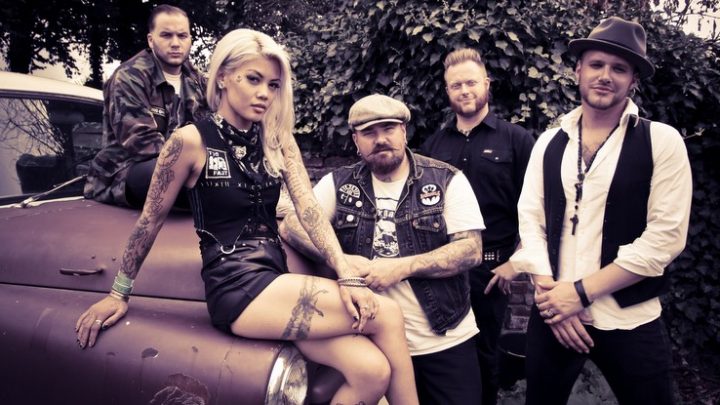 Wow, the vibe here at the 11th installment of Amnesia Rockfest is very chill. As usual, there are huge crowds, but things seem to be running very smoothly, and the swaths of people seem to be extremely relaxed.

Not only are fans taking in the shows that they want, but they’re indulging in a bit of deep-fried heaven (the fries smell out of this world). With a full belly, some folks are playing hacky sack and other semi-athletic pursuits, while others are lounging in the sun (some are starting look as fried as those french fries). And everyone is so well-behaved.

Well, you didn’t come here to read about those trivial things, did you? You want to know about the performances! And don’t forget that we have galleries coming up too!

Honestly, it’s been pretty tough to secure interviews, as it seems that most bands are in and out like this was a brothel. We did, however, manage a chat with The Creepshow bassist, Sean McNab, and with The Brains bassist, Colin the Dead. Let’s just say it was HEAVY. OK, not really, but each interview was a lot of fun.

Highlights for our day, so far, have been, well, The Brains and The Creepshow, both of whom put on spectacular sets. Full of energy to say the least, and the audience response was phenomenal.

After that, things got a bit heavier… and different. We took in a bit of hardcore act Comeback Kid, and they sounded as good live as they do on record. I know it’s hardcore, but man those are some angry dudes.

Next up was Max & Igor Cavalera, who are running down an anniversary performance of Roots. As such, they opened their set with “Roots Bloody Roots,” and then proceeded to destroy the audience with one heavy track after another, even bringing out some traditional Brazilian instruments. One thing I wonder about though is how Sepultura, who’s playing tomorrow, feels about Max and Igor playing Roots.

We also came across Insane Clown Posse, who was spraying the audience with Root Beer. Not being a fan of ICP, I can only assume that it must be their thing. As we walked away, I could only think that ICP is just about music’s lowest common denominator.

Then, we rushed to catch Cannibal Corpse, who were as brutal as ever. They play death with the gusto of a ravenous zombie apocalypse survivor smashing brains with a sledgehammer! And I wouldn’t want to get caught up in the cyclone of Corpsegrinder Fisher’s windmill!

That’s it for now, but stay tuned as we’re here all weekend.