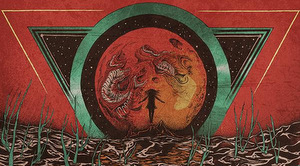 New Jersey-based progressive heavy metal outfit, Binary Code, brings a ’90s-era alt metal vibe to their sound on the newly released single, “Moonsblood,” which you can catch in the player above. The track comes to us from the band’s upcoming May 24th release of Moonsblood.

On my end, the music was written during the aftermath of Hurricane Sandy. We had no power for two weeks, the place I lived in was in total post-apocalyptic dismay. I wrote the song on acoustic guitar, oddly enough. I had just watched the movie Melancholia by Lars Von Triers, which was about a planet colliding with Earth. I just tried to tie in a score of sorts to what I was surrounded by, coupled with the atmosphere of the movie. Oded’s lyrics are certainly complementary to the tone.

If you like Clutch and the softer aspects of Fear Factory, you can pre-order Moonsblood now via the band’s Bandcamp page — the first 50 pre-orders will receive a special signed poster featuring the album art image above.