Want To Be In An Amon Amarth Music Video? 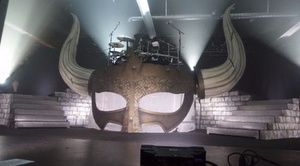 Normally when a band makes an open casting call for a music video, it requires said fans to be in a particular location on a particular date. Well, that’s not the case here. Amon Amarth is holding an “open casting” for fans to be in the “Raise Your Horns” music video, and fans don’t even have to travel beyond their front door! All the band is asking fans to do is submit a video of themselves being metal.

Submission deadline is May 27th. See below for more information or go to AmonAmarth.com.

[sic]
Amon Amarth is inviting fans around the globe to be a part of their forthcoming video for “Raise Your Horns”! The video will include live clips of the band performing in multiple countries, plus you – the fans – raising your horns to Amon Amarth! Do you have a wall plastered with Amon Amarth and other metal posters? Did you just attend a live show or are going to one soon? Send us clips of you and your friends raising your horns to the band for a chance to be included in the video. Clips should be e-mailed to raiseyourhornsvideo@gmail.com. YouTube links should include #RaiseYourHorns in the title. Submissions are requested to be sent in by May 27th, 2016. The video is tentatively scheduled for a June release.