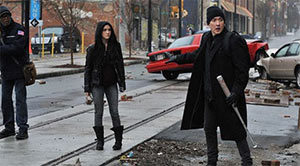 We’ve got excellent news today for horror hounds and specifically fans of renowned horror author Stephen King. Saban Films has acquired the U.S. distribution rights to sci-fi horror film Cell, which is based on King’s apocalyptic novel of the same name.

The film was directed by Paranormal Activity 2’s Tod Williams from an adapted screenplay by King and Adam Alleca (The Last House on the Left).

The story follows a mysterious cell phone signal that’s broadcast across the network and turns the population into mindless animals. Cusack plays a struggling graphic artist who bands together with a small group of fellow survivors to trek across a decimated New England to seek answers and reunite with his son.

Cell has been on route to big screen for quite some time, fortunately, it finally got acquired so the film will hit theaters sooner than later now. Cell stars John Cusack and Samuel L. Jackson along with Isabelle Fuhrman, Owen Teague, and Stacy Keach.

An official release date is expected to be announced very soon. So stay tuned to Yell! Magazine.