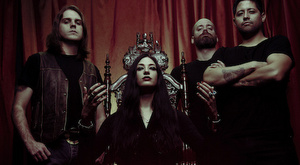 Last summer we brought you “Goodbye Gemini” from psychedelic occult act Blood Ceremony and their previous album, The Eldritch Dark. Today, we’re letting you know that the long-awaited album, Lord Of Misrule, will finally see the light of the moon tomorrow, March 25th, and right now you can stream the whole masterpiece over at Noisey. It won’t take you but two minutes to fall under the spell of the amazing music and the mesmerizing vocals of frontwoamn Alia O’Brien.

As for the album’s title, here’s the explanation on offer:

In a tradition that dates back to Late Antiquity, the Lord Of Misrule or ‘Abbot of Unreason’ was the doomed figure elected to preside over the Feast Of Fools, an annual Saturnalian bacchanalia in which masters became servants and servants masters, while drunken revelry and strange entertainments pervaded Britain and parts of mainland Europe for 30 days. At the end of the month’s festivities, the Lord of Misrule’s throat was cut in sacrifice to Saturn.

Taking its title from this fascinating slice of religious history, Blood Ceremony’s fourth album evokes pagan rites and the bizarre mystical underbelly of rural Britain. Embracing the psychedelic and progressive in their indelible songcraft, guitarist Sean Kennedy, bassist Lucas Gadke, drummer Michael Carrillo and triple threat vocalist/flautist/organist Alia O’Brien have created what Kennedy calls “a very English album,” despite the band’s very Canadian heritage. Recorded to analogue tape with producer Liam Watson at Toe Rag Studios in London, Lord Of Misrule possesses a timeless quality within the rock epoch: It could stand alongside a Shocking Blue or Deep Purple record as easily as it will take its place among 2016’s finest albums.