McGregor vs. Diaz Rematch In The Works For UFC 200 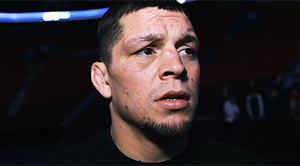 You heard right! There’s a good chance Conor McGregor won’t be defending the UFC featherweight title in his next bout. It appears like the UFC is aiming to pull off a massive event for UFC 200, and scheduling a rematch between McGregor and Nate Diaz is what they have in mind at the moment.

There’s been rumors McGregor was expected to defend the strap against Jose Aldo or Frankie Edgar, but the decision to finalize a non-title welterweight rematch between McGregor and Diaz for the July 9 fight card is what the UFC wants because their first match at UFC 196 blew away numbers and they expect to get even better results at UFC 200. According to MMA Fighting, the promotion will make an official announcement as soon as they close the mega deal.

At UFC 196, Diaz put away the Irish sensation in the second round via rear-naked choke. Will Diaz be able to pull off the unexpected again? I guess we’ll see at UFC 200, which takes place at the new T-Mobile Arena in Las Vegas, Nevada.