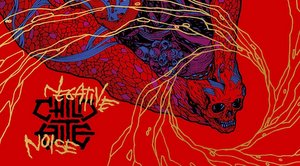 Basically saying don’t blame the music, movies, or video games, Child Bite has unleashed their new track, “Video Blood,” via No Clean Singing. Head on over and witness the thumping noise as it comes barreling out of the ’90s like an indie rock band’s anthem.

‘Video Blood’ is a bit different from the rest of the batch. We wanted to counter the more complicated tunes on Negative Noise by having some simpler ones. Everything from the bass lines to the repetitive lyrics to the overall structure are paired down from what we tend to do. Lyrically, it’s about violence in entertainment. It’s the antithesis of thinking that these types of films and games are bad for kids; my stance in the song is that it’s good to be exposed and desensitized to that stuff. It has as much to do with the PMRC/Parental Advisory stickers as it does Columbine as it does that scene in A Clockwork Orange where Malcolm McDowell has his eyes forced open. Obviously, my references are of immediate relevance. All kidding aside, it can be summed up by this line from the song; ‘Artificial violence satisfies the dark urges within.’

Negative Noise will be out on April 1st, but pre-orders can be made here.