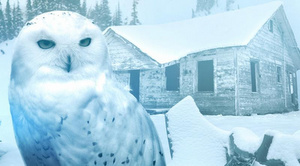 Harsh Conditions, the second full-length from Arizona doom act Via Vengeance, is now playing in its sprawling entirety at Noisey, just days ahead of its release through Battleground Records, and the beginning of the 3 Man 2 Band Tour 2016 with Gomi.

The brainchild of soloist Shane Ocell — also drummer of Phoenix-based Sorxe — as Via Vengeance, he handles all instrumentation and vocals, even performing the tracks himself at live performances without the use of any looping or manipulation devices. Delivering 42 minutes of pentatonic, mid-paced, sludge/doom metal with Harsh Conditions, the album’s 11 tracks forming a thematic concept about winter survival. Recorded in Phoenix by Jared Cox, Ocell includes several special guest appearances on the album, including piano and clean vocals by his grandmother, BJ Scott, and guest vocals and guitar by longtime friend Josh Graham of A Storm Of Light, who also created the immersive winter elements cover artwork for the album.

Battleground Records will release Harsh Conditions on CD and digital formats on March 11, 2016. Pre-orders for the CD are available here.

Beginning the day of Harsh Conditions‘ release, Via Vengeance will head out on the 3 Man 2 Band Tour 2016 with duo Gomi, with shows in Flagstaff, Colorado Springs, Denver, Lawrence, Chicago, Cleveland, and Akron March 11th through 19th. A week later, March 26th will see Via Vengeance supporting Black Tusk and Holy Grail at a home turf show in Scottsdale, which will double as the release party for Harsh Conditions. Additional live dates are to be expected.