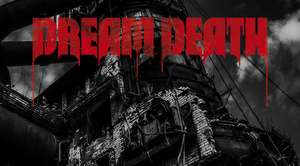 Good god! I am just two tracks into the new Dream Death album, Dissemination, and it’s the best thing I’ve heard all week! Sure, it’s only Monday, but let’s also count last week.

It’s gritty, low-fi, bare-bones gutter metal. Trust me, after listening to this album you’ll feel like you just spent an hour in the mosh and that you’re in dire need of a shower to wash off the grime, sweat, mud, and blood. As an added bonus, as the third track begins, there’s a tendency here to start each song off with an eerie horror-esque soundscape… and as track three progresses, heavy bass drones and a spoken-word delivery ensues. Yes! This is truly awesome shit and I can’t wait to hear the rest.

Oh, excuse me. I’m being selfish here. You can head on over to bloody-disgusting.com to stream the album for yourself… and you’re going to want to! Especially if you’re a fan of early Slayer and early Type O Negative, among many other sources of inspiration.

Go ahead and pre-order the fucking metal here! Somewhere in the darkest depths of Pittsburgh, Dream Death have risen from their self-imposed grave. After making their full-length debut in 1987 with the groundbreaking doom/death/thrash masterstroke Journey Into Mystery — an album that somehow bridged the groaning gaps between Celtic Frost, Slayer, and Saint Vitus while going on to influence many a notable death metal and death/doom faction — the vastly underappreciated band pulled their own plug in ’89 and formed the more traditional doom outfit Penance. The latter’s 1992 album, The Road Less Travelled, was one of the earliest Rise Above releases, while Dream Death began what would prove to be a 22-year hibernation. In 2011, vocalist/guitarist Brian Lawrence, drummer Mike Smail (formerly of both Pentagram and Cathedral), bassist Richard Freund and guitarist Terry Weston regrouped and eventually stormed the studio for Dream Death’s 2013 comeback album, Somnium Excessum.

The band’s third and latest, Dissemination, marks the return of The Road Less Travelled lineup to Rise Above, this time in their resurgent Dream Death incarnation. Forged in the dank recesses of Lawrence’s basement, Dissemination is the apogee of a creative process that recaptured and reinforced the singular spirit of Dream Death’s late ’80s triumphs. “While I’m proud of the material on Somnium, I think there was some experimentation there that could have been reigned in a bit,” Lawrence offers. “The tracks on Dissemination are much more focused and delivered with intent.”

Head-on just happens to be the best way to experience Dissemination. Not to mention loudly and often. Dissemination is set for a March 4th release via Rise Above Records.

1. Dissemination
2. Expendable Blood Flow
3. Crawling
4. The Cold Hard Light
5. All in Vain Start
6. Dominion
7. The Other Side
8. Nothing Ever Will
9. Neutral Ground
10. In Perpetuum