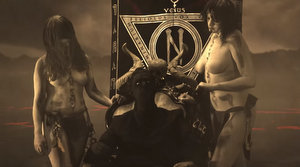 Quebec-based slingers of black metal, Necronomicon (not to be confused with the German punk band of the same name or the book from Evil Dead) will summon a new album, Advent of the Human God, on March 18th in Europe and on March 25th in North America.

If you need some persuasion, check out the video for “Rise of the Elder Ones” (there’s some censored nudity in it for ya) above, and “Crown of Thorns” below. You can also click on the following song titles for streams of those: “I (Bringer of Light)” and “Unification of the Four Pillars.”