Don’t Be “Ashamed,” This Is Hibria! 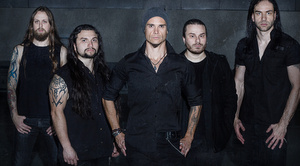 This is worth your time! Have a listen to the new Hibria track, “Ashamed,” courtesy of its lyric video. The track comes from the band’s self-titled fifth album, which was released in August 2015. Order the album here.

A Brazilian power metal band formed in Porto Alegre, Rio Grande do Sul, in 1996, Hibria has grown in popularity in their home country and worldwide with the successful release of four albums and a live DVD that showcases their intense concert energy. All four of their past albums and live DVD released have reached the #1 position on sales charts for HMV stores across Japan and has led the band to be support for such bands as Metallica, Black Sabbath, Ozzy Osbourne, Megadeth, and they’ve performed at Rock in Rio and Loud Park, Japan’s most important Metal festival, where they shared the main stage with some of the world’s best-known bands.