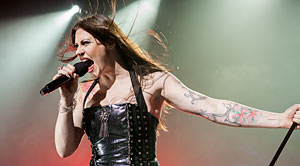 Nightwish played at the Metropolis in Montreal, Canada, on Sunday, February 21st, and we were there to take it all in. Included in our adventure was a bit of the pre-show sound check, which gave us a sneak peek at a special surprise on-stage guest.

Not long after our interview with Nightwish frontwoman, Floor Jansen, the venue was packed. I swear that I almost have never seen the place so full, especially before the main act took the stage.

The winter night started out with the Dutch symphonic metal band, Delain, warming up the stage first. They were good, and probably should have provided direct support to Nightwish. The surprise guest I mentioned above, well that happened during the Delain set when Arch Enemy‘s Alissa White-Gluz. It was only a brief moment, but the audience recognized who it was right away and showed their approval the only way a heavy metal crowd knows how, with load voices! So, Alissa growled for a few seconds and Delain continued for a few more minutes.

Next up was Nightwish countrymen, Sonata Arctica. I won’t say they sucked and I won’t say they were great, but the last four songs or so ended as if it were their last, as frontman Tony Kakko stood there waiting for applause, and each time they started a new song my soul died a little more.

Nightwish, however, was able to erase any memory of what came before them. With an ominous track to build suspense, the band took the stage one at a time, and with each member a roar from the crowd, and opened the show with “Shudder Before the Beautiful,” the opening track to their latest album, Endless Forms Most Beautiful.

Dressed in a glimmering silver corset affair, Jansen commands the stage, and given her roughly 6-foot stature, there’s no reason she shouldn’t dominate. It would be one thing if she sucked, but the woman is a powerhouse of vocal styles, hitting operatic notes with perfection and traditional rock tones with swagger.

Bass man Marco Hietala also had his fair share of vocals to deliver, and he’s always a nice element to the songs. In fact, dude could probably front his own band.

There were a few other songs from the new album, including the massive hit “Elan,” which also treated the audience to some traditional instrumentation from Troy Donockley.

Even with a relatively new singer on board (Floor permanently joined the band in 2013, and now has one album under her belt), the Nightwish was firing on all cylinders and it was apparent that this is a band who’s been delivering epic performances for many years.

If you have the chance, go see Nightwish to see how symphonic metal is done right! In the meantime, enjoy the photo gallery above from the show we attended.

Photos are from our very own King Hazard.