Inverloch Unleashes The Haunting Track, “From The Eventide Pool” 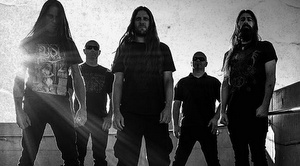 Australian death/doom quintet Inverloch is set to release its highly anticipated full-length debut, Distance | Collapsed, in just over two weeks (March 4th) via Relapse Records. The band harnesses the crushing, atmospheric spirit of its predecessor, Disembowelment, on latest track “From The Eventide Pool,” which can be streamed now via Invisible Oranges.

Inverloch has just announced a run of European dates this coming April with labelmates Usnea! The band has also been confirmed for the legendary Roadburn Festival in The Netherlands this coming April alongside Neurosis, Tau Cross, and many others, and will also be performing at SWR Barroselas Metal Fest in Portugal this coming April. Check out confirmed locations below.