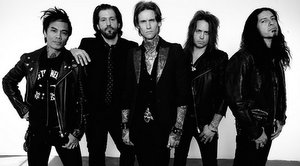 Buckcherry has released a digital-only Deluxe Edition of their seventh studio album, Rock ‘N’ Roll, through their own label, F-Bomb Records. The newly packaged record will include the original album, plus three songs that include a new version of “The Feeling Never Dies,” featuring a duet with Grammy Award-winning country music superstar Gretchen Wilson, a b-side titled “Cannonball” and a brand new song called “Getting Started.” In celebration of the release, Buckcherry has released “Getting Started” for the first time ever. Listen to the song in the player above and let us know what you think.

Clearly, “Getting Started” has roots in blues rock, that’s kinda what Buckcherry is about, but there’s a hint at country too. However, that country tinge isn’t nearly as distinct as it is on the newly released “The Feeling Never Dies,” which features country superstar Gretchen Wilson. Check out the track now here. Fans can catch Buckcherry live in concert across the U.S. this spring and summer. Additional dates will be announced soon. Follow the band on Facebook for additional news and updates.