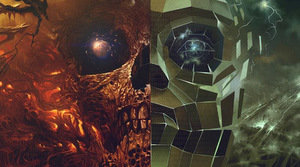 Check out that album cover! There’s proof that you can judge a book by its cover.

Los Angeles death metal unit, The Zenith Passage (which features within its ranks current and former members of The Faceless, Fallujah, and All Shall Perish), will unleash its long-awaited debut full-length on April 15th, via Unique Leader Records. (You can check out their EP, Cosmic Dissonance, below.) Titled Solipsist, the 10-track offering was engineered, mixed, and mastered by Zack Ohren (Animosity, Suffocation, All Shall Perish) at Castle Ultimate Productions with additional engineering by Zenith Passage guitarist Justin McKinney and Michael Keene (The Faceless) at Keene Machine Studios.

Across 40 minutes of music, The Zenith Passage examines the idea of solipsism, a philosophical theory that the self is all that can be known to exist, anything else outside of one’s own mind is uncertain. The Zenith Passage builds upon this foundation, expanding into themes of nonexistence and a computer-generated fictional reality experienced by all of humanity. Solipsist demands that listeners join the band on their voyage to explore the unsettlingly complex and improbable world they’ve uncovered in this bold experiment, this gut-wrenching visceral transmission of disturbing intellectual revelation.

About The Zenith Passage:

In early 2012, a small recording collaboration between two friends, Justin McKinney and Greg Hampton, triggered the coalescence of something great. From its modest roots in a stuffy Los Angeles apartment, the music of The Zenith Passage has quickly grown to be anything but humble. Even the earliest demo tracks were a relentless torrent of technical guitar work accompanied by a distinctly frenetic and brutal vocal delivery that has since become an unmistakable mark of the band’s insatiable desire to push their own limits as well as the limits of technical metal. Far from being an aimless shredfest, the music is driven by a thematic backbone that manifests in various aural and conceptual dimensions of the music. Progressive interludes punctuate the pummeling onslaught, invoking a palpable sense of breathtaking dread and reverence for things beyond mortal comprehension. While creating something uniquely their own, The Zenith Passage’s work clearly nods to those who inspired their sound, such as Deeds of Flesh, Decapitated, Spawn of Possession, Severed Savior, and Aeon.

Upon the release of The Zenith Passage’s initial offerings, the unexpectedly positive response of fans across the Internet convinced the duo to redouble their efforts in earnest and to find musicians capable of completing their lineup. This proved no small task, but months of persistent efforts precipitated the addition of drummer Luis Martinez. The subsequent release of a proper EP in January 2013, entitled Cosmic Dissonance, catapulted The Zenith Passage’s recognition to unexpected heights, greatly broadening their fanbase and catching the attention and admiration of some of California’s foremost metal musicians. Not long thereafter, it was announced that Rob Maramonte (ex-Fallujah, ex-All Shall Perish) would step in to lend his talents on guitar. Amidst the swelling tide of the band’s progress, it was only natural that The Zenith Passage follow the way of those who led them down their twisted artistic path: in the summer of 2013, they signed a multi-album deal with Unique Leader Records.

Now, with their debut full-length album, Solipsist, set for release on April 15, 2016, the stage is set for The Zenith Passage to reveal their most impressive statement to date. Rest assured, this marks only the beginning; this is but the first footprint on their path toward the pinnacle, the apex, the Zenith.

The Zenith Passage Is: