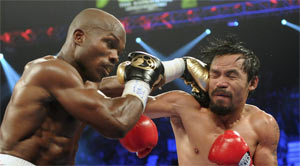 In what is supposed to be the final fight in his boxing career against Floyd Mayweather this year, is quickly turning out to be false. News broke out today that Manny Pacquiao will be stepping inside the four cornered ring another time to face another deadly opponent. An American fighter he squared off against twice in the past and lost once, Timothy Bradley.

According to Dan Rafael of ESPN, Pacquiao vs. Bradley 3 will take place on April 9, 2016 at the MGM Grand Garden Arena in Las Vegas, which will air live on HBO pay-per-view. The pair first faced off in 2012 when Pacquiao lost by a controversial split decision to Bradley. In 2014, they rematched for the WBO welterweight title, but this time Pacquiao winning by clear unanimous decision.

The highly-anticipated bout will be for the WBO welterweight belt.