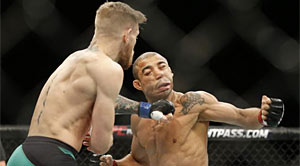 The biggest and most-anticipated MMA fight card of the year took place last night in Las Vegas, which featured two UFC title fights at 145 and 185 pounds. In the main event, Jose Aldo finally squared off against Irish sensation Conor McGregor. Unfortunately, the featherweight title fight only lasted 13 seconds long, making it the shortest title fight in the history of the UFC. That’s right! McGregor, 27, annihilated Aldo with a single punch to the chin in the first round, as he predicted in interviews leading up to the fight.

[Aldo’s] powerful and fast. But precision beats power, and timing beats speed. And that’s what you saw there.

In the co-main event, the man who defeated Anderson Silva twice inside the Octagon, Chris Weidman, squared off against former STRIKEFORCE champ Luke Rockhold in a five-round middleweight title fight. Weidman lost the bout and his title via TKO in the fourth round, which was also his very first defeat in his MMA career. The former champ looked solid in the first two rounds, but the table quickly turned on him in the third when he tried a wheel kick to the head which resulted in giving up the back to Rockhold who quickly transitioned to a successful and damaging ground-and-pound from the full mount. In the early minutes of the fourth-round, referee Herb Dean was forced to stop the fight because Weidman couldn’t defend himself on the ground.

I was hoping he would [stop it]. He kind of stopped it at the end, I wasn’t exactly sure. I sucked it up. Had to go another round. Whatever. All I care is I got the belt. And new [middleweight champion].

For the rest of the UFC 194 fight results and bonuses, continue reading below.