Prisoners Writer To Pen Next Friday The 13th Installment? 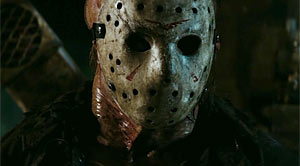 With a new official Friday the 13th video game moving forward for a release next year, it’s quickly getting time for Paramount Pictures and Platinum Dunes to get their asses off the ground and get moving on the next installment in the film franchise. That’s if they plan to release the film around the same time as the video game, which is slated for October 2016.

Anyhow, it appeared like the film was in the pipeline when prior screenplay drafts were worked on by Nick Antosca (Hannibal TV series) and Richard Naing and Ian Goldberg (The Autopsy of Jane Doe), respectively. But recent creative changes suggest the studios are involving brand new talent for the next Friday the 13th instalment. According to TheWrap, David Bruckner is no longer set to helm the new F13 movie and eyes are now set on Aaron Guzikowski (The Wolf Man reboot, Prisoners, Contraband) to pen a fresh screenplay draft, with negotiations currently underway.

While plot details are still under wraps, F13 will most likely focus on the return of horror icon Jason Voorhees, who continues to brutalize young camp counselors at Camp Crystal Lake for the past three decades.