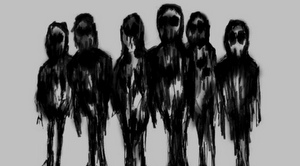 Post-hardcore fans are sure to dig deep into the new track, “Their Influence,” from the six-man outfit, Ocean Grid. It’s definitely not going to be everyone’s cup of tea, but there is something in it that really captivates the listener.

Ocean Grid explains the force behind the new EP:

The Influence of Monsters EP brings a positive light to all of the negativity that people deal with every single day, everything from depression and anxiety awareness, self-hurt and suicide prevention, and giving hope to those who are bullied and victimized due to any Monsters that they deal with on a daily basis.

OK, I’m all for supporting those who are hurting, and for putting bullies in their place, but this statement from the band… oh, Lord, cry me a fuckin’ river! But, I suppose hearing a band make such a statement actually means something when you’re young and looking for understanding and support.

The Influence of Monsters Track Listing: