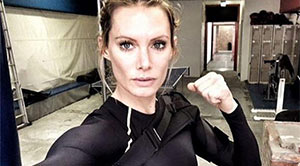 Over the past two weeks, Resident Evil stuntwomen Olivia Jackson has been laying lifeless in a hospital bed after a serious accident that took place on the South African set of Resident Evil: The Final Chapter, which is currently being filmed. While shooting a scene for the sixth and final installment, Olivia who serves as the stunt double to Milla Jovovich struck a camera crane during a dangerous motorcycle stunt.

Now, on the road to recovery, she details via Facebook the horrific extent of her injuries, but assuring friends and family that she is beginning to heal.

Jackson finishes her post by saying: “Thanks to everyone for their prayers and beautiful messages. I’m sure it’s all helped pull me through this difficult time. Long road to recovery but just gonna take it day by day.”