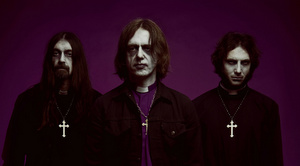 If you want something that’s heavy, with grit and balls, then you want to listen to the new doom metal offering from With the Dead, “Living with the Dead.” The track comes from the band’s forthcoming self-titled debut (October 16th), and it’s a bone-crushing eight minutes of pure down-tuned, mid-tempo heavy metal glory!

Pre-order With the Dead here.

About With the Dead:

Like the product of some sort of alchemical alignment or a diabolical modern demon summoned by a whispered incantatory spell, With the Dead were formed on All Hallow’s Eve 2014, by the founding rhythm section of occultist doom overloads Electric Wizard guitarist/bassist Tim Bagshaw and drummer Mark Greening, a pair once notorious for the sheer brute heaviness of their bowel-shaking sound and early extra-curricular activities that involved excess, injury, and low-level criminality (arrests for the theft of a crucifix from a church roof and drunkenly robbing an off-licence to name but two). Both have also played together in Ramesses.