Zack The Zombie Exterminator: “It’s Like Wayne’s World Meets Dawn Of The Dead” 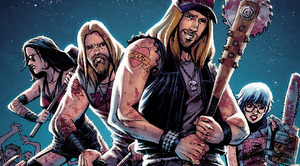 A year ago, Zombies started rising here and there. We expected the apocalypse. Instead, we got… pests. Zack Zander is a redneck metalhead with a talent for zombie splatting. And his whole family gets in on the action. Together, the Zanders make up Z-Gone, “semi-professional” zombie exterminators. And they showcase every second of gory mayhem on YouTube.

Now, Zack has one chance to make things right. And all he has to do is kill a horde of flesh-hungry zombies and stop the god of Death from destroying the world.

“It’s like Wayne’s World meets Dawn of the Dead,” says co-creator Brian Pulido. “The horror is real, but the characters’ reactions are where the comedy lies.”

The graphic novel, along with several limited editions and other cool collectibles will be available during a 30-day Kickstarter campaign that launched yesterday, September 30, 2015. Make your contribution here.

“We all love AMC’s The Walking Dead. Week after week the show delivers gut-wrenching drama, dangling its characters over the brink of extinction. It’s thrilling, thought-provoking, and… utterly depressing. That’s not Zack,” says Mike Maclean. “Simply stated, Zack the Zombie Exterminator puts the fun back into zombie splatting.”

From the twisted minds of Brian Pulido and Mike MacLean comes the rise, fall, and redemption of an American original, Zack the Zombie Exterminator.

Zack The Zombie Exterminator began as a short film produced in conjunction with SyFy and Eric Fox. You can watch the short at www.ZackZX.com or just below