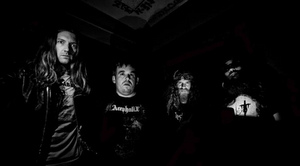 This Friday, September 25th, Seattle, Washington’s extreme metal act, Black Breath, will release their third album, Slaves Beyond Death. Get an early taste of the full album over at Invisible Oranges, where it’s streaming in its entirety. If you like heavy and compelling riffs, breakdowns, blast beats, and understandable death growls, then this magnificent piece of devastation is right for your ears.

If you dig this thrash metal/death hybrid, order the album here.

Recorded with Kurt Ballou (Converge) at GodCity and mastered by Brad Boatright at Audiosiege (Nails, Integrity, Obituary), Slaves Beyond Death shows the quintet’s groove-entrenched and hardcore-drenched death metal with even harsher, bleaker tones than ever before, with 50 minutes of adrenalized oppressiveness.

As with the band’s previous works, Heavy Breathing and Sentenced To Life, Southern Lord will release Slaves Beyond Death worldwide on CD and digital formats this Friday, September 25th, with the vinyl version coming in late October.

While currently still embarked on the Southern Lord West Coast Tour with Goatsnake, Battalion Of Saints and Obliterations — which includes a hometown record release show for Slaves Beyond Death this Saturday — Black Breath continues to book new tour dates in support of the album. Directly following their recently announced performance at the Housecore Horror Fest in San Antonio on November 12th, the band will rendezvous with Havok for a run of four dates through California, bombing Oakland, Hollywood, Santa Ana and San Diego November 11th through 17th. Additional international tour dates will be announced throughout the remainder of the year as well.