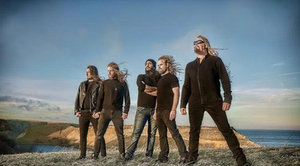 Earlier last week, new progressive thrash metal band, One Machine, released the video for “Forewarning,” which we brought to you with great enthusiasm. Shortly after the video release, on September 18th, the band released their second full-length album, The Final Cull, via Scarlet Records.

Featuring guitarist/songwriter Steve Smyth (Testament, Nevermore, Forbidden, Dragonlord, Vicious Rumors), One Machine delivers a crazy good mix of thrash metal, progressive metal, power metal, and much more. With their unique blending of styles they avoid sounding like anyone else, and they sure as fuck don’t sound cheesy doing it. It’s clear that their sole purpose is to thrash hard and heavy — and that, Yellers, is always a good thing!

If you’re curiosity is piqued, head on over to Metal Injection for a full album stream of The Final Cull. You know you’re going to like it, so make sure to order the album here.

The Final Cull was tracked at Death Island Studios, with Marco Angioni and Tue Madsen helming.

European fans can catch One Machine on tour this fall! See below for all currently confirmed tour dates.