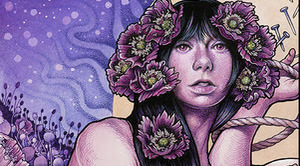 “Chlorine & Wine” is the first new music we’ve all heard from Baroness in three long years, but one listen and you’ll be thinking it was worth the wait. The track is the first to be released from the band’s upcoming album, Purple, which will be released on December 18th, via the band’s newly formed label, Abraxan Hymns.

The track opens with a sort of dream-like prelude that’s soft and captivating, but a bit too much like something you’d hear in an atmospheric massage session. But, before long the tack breaks into something equally soothing, but a bit more recognizable, being grounded in guitars and drums, before John Baizley breaks in with his vocals and we’re transposed by his voice and words.

About the track and the new album, Baizley commented:

After releasing a lengthy and investigative record like Yellow & Green we all felt that we needed to make something much more direct and immediate. We wanted to write with our normal focus on artistry, balanced against an increased level of energy and focus. It was important for us to write our new songs with the type of enthusiasm and expressiveness that could act as a counterpoint to the album’s dark themes. As a result, the music came out in an intense, heavy and sonically captivating in a new way, which was important, loathe, as we are to fall into any kind of complacency pitfall or formulaic songwriting routine. Purple is the most fully realized representation of our intention as a band; considering the amount of physical and mental energy spent writing it, we have accomplished something which would have seemed impossible to us a couple of years ago.

Pre-order packages for Purple, which feature an instant download of “Chlorine & Wine” as well as a limited-edition colored vinyl version of the new album, two picture discs, t-shirts and other unique items, are available here.