Is There A New Blade Movie In The Works? 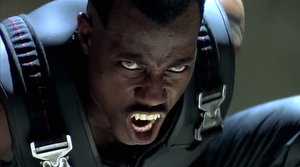 I think we all remember the Blade movie trilogy starring Wesley Snipes, and I think we can all agree that, for the most part, it was pretty badass… or at least descent. Even the last one that got panned by fans and critics alike was pretty entertaining. Well, if you’re not aware, Marvel was/is planning to “reboot” the comic series, which would star Blade and his newly created daughter, Fallon Grey, and that newly reinvigorated series starting at a new #1 has been postponed. Why? Apparently Marvel Entertainment is also looking to reinvigorate the movie franchise… using the new comic storyline as the baseline, according to Bleeding Cool. And there’s no reason to really doubt this given that Snipes mentioned at the San Diego Comic-Con that there have been talks about boosting the movie franchise.

Here’s the description of the new Tim Seeley written Logan Faerber drawn comic book series:
Fallon Grey is a 16 year old girl from rural Oregon. Nominated for prom queen, captain of the debate team, most popular girl in her class. But there is another side to Fallon. A feeling like there’s something more inside of her. When terror strikes her small town, she’ll find out just how right she was. As fearsome supernatural forces hunt Fallon, she’ll come face to face with something even more shocking than the monsters on her tail. Eric Brooks… Blade… her father?! And in each other, they’ll discover the purpose they’ve each been struggling to find.

So, let us know if you’re interested in a new spin on the Blade movie franchise in our comments section below.