Epica Returns To North America For A Tour Run With Elueitie 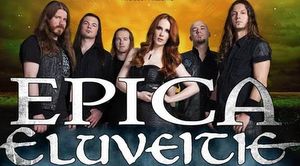 Epica is symphonic metal royalty, and they’re finally making their return to North America for a co-headlining tour with Eluveitie. Joining the bill for the duration of the tour is Montreal’s The Agonist and Martina Edoff (from September 18th to October 3rd). See below for the list of dates.

We are ecstatic to finally return to North America. It is time to nurture our long-distance relationship with our fans over in North America. We’ll have a wonderful time together and will perform songs spanning our entire discography. You guys better be ready for us.

This will be Epica’s first North American run in support of their highly acclaimed latest album, The Quantum Enigma, which hit the charts all over Europe and beyond. Watch Epica’s video for “Victims of Contingency.”

Epica and Eluveitie will both be offering VIP ticketing including meet & greets, exclusive merchandise, a Revolver Magazine subscription and the Epica VIP bundle also includes a live 7″. VIP Tickets are available through Soundrink.