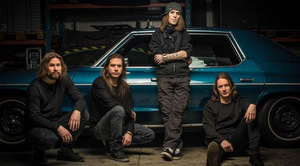 Children of Bodom have just released the second and title track from their upcoming album, I Worship Chaos (October 2nd). Stream it in the player above, and if you dig it, head here to buy it.

As an added bonus if you pre-order the album via iTunes or Amazon “I Worship Chaos” and the first single, “Morrigan,” will be available as an “instant grat” tracks.

To me it seems like I Worship Chaos has a lot darker vibe in it than the previous albums and so far everyone has told me that the songs are a lot catchier this time which I’m definitely glad about. To sum it up… It’s angry, dark, and catchy as fuck. I think it’s safe to say I Worship Chaos is COB reborn even more pissed off.