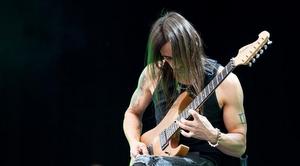 The one thing that sucks about being a journalist and/or photographer covering a heavy metal festival is that you often miss an entire set or only get to see a portion of a set before duty calls and you have to write, interview, or see part of another band’s set. Sure, that happens to just about everybody at these large-scale events, but at least paying fans can pick and choose who they see and what they’ll miss. Although I was only into Extreme for a hot minute back in the day, I would have chosen to see them play live (instead of watching the performance on a television in the media/press area). I mean, c’mon, no matter how annoying Gary Cherone is with his “I’m taking a crap” poses and awkward gyrations, you can’t deny Nuno Bettencourt’s brilliance on guitar… plus, their playing of “More Than Words” has to be the first time ever that a true, genuine ballad was played at Heavy Montreal. We also would have liked to see the following: Cattle Decapitation, Nothing More, and, last but not least, Lagwagon.