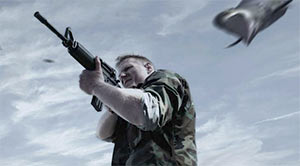 Fans of MMA and sci-fi horror will be happy to hear the highly-anticipated third installment in the Sharknado film series will combine a very familiar face from one world to the other.

Since December 2013, MMA veteran Josh Barnett has taken a small break from fighting inside the cage to focus on his acting career. However, don’t expect Barnett to completely give up MMA and land a huge role alongside Tom Cruise or Brad Pitt anytime soon. I’d suggest you start associating him with B-movies first, something along the lines of Sharknado 3: Oh Hell No!. According to an NBC Universal representative, Barnett will play the role of Sgt. Richards, who helps fight off incoming Sharknados.

There’s no official word out yet on how many minutes of screen time he will have in Sharknado 3, but I’m pretty sure will see him blast away a few sharks before he gets shredded into pieces.