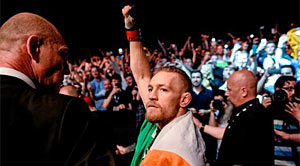 The UFC 189 fight card was stacked, but it was all about the Irish sensation Conor McGregor tonight. Throughout the entire build up for UFC 189, McGregor talked the talk, and tonight, he finally walked the walk.

It took McGregor two rounds of total excitement to finish the all-American Chad Mendes, and he pulled it off fairly effortlessly. However, Mendes’ wrestling and ground-and-pound did manage to slow down the Irishman for a few moments, but McGregor’s striking was the biggest threat in the title fight. After being held down and nearly put into a choke hold by Mendes in the second round, McGregor managed to slip out of it and get back up. On his feet, McGregor put Mendes to work with precision combinations, which dropped Mendes at 4:27 in round two. It was sweet!

As for the co-main event, Lawler vs. MacDonald 2 is arguably the best title defense fight in the history of the UFC. It was a five-round brawl between Robbie Lawler and Rory MacDonald. However, the Canadian wasn’t explosive enough tonight. MacDonald’s strongest round was the third. Lawler put MacDonald away in the fifth round with a punch, which might have shattered his nose. Lawler successfully defended the welterweight gold for the first time since defeating Johny Hendricks.

As for the rest of the UFC 189 results, continue reading below.