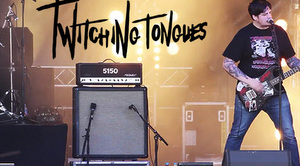 Hardcore/metal fans looking for a new-ish band to sink their teeth into may want to check out Twitching Tongues, who have just announced their third album, Disharmony, which should see light this fall via Metal Blade Records.

Twitching Tongues recently played at the 10th anniversary edition of Hellfest in Clisson, France, where they played the title track, “Disharmony,” from their forthcoming album. You can watch the live performance of the song in the player above, although the sound quality isn’t the greatest.

When your band’s existence is pretty much solely based on live videos from Dynamo fest in the ’90s, playing something like Hellfest is pretty fucking cool. Especially getting to play ‘Disharmony’ live for the third or fourth time ever.

Twitching Tongues continues their tour of Europe tonight in Belgium. The remaining dates are listed below. New music and album details will be released in the coming weeks.