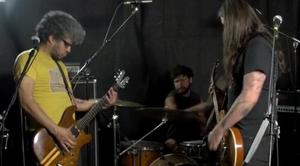 What’s being touted as noise metal, Drunk Dad and their recent video for “Whiskey Liver” sounds more like indie rock (like Sonic Youth) meets grunge meets Fugazi, which isn’t an insult by any means. Drunk Dad recently hit up TVPDX Portland Television to record six tracks, and with cameras in tow, the first evidence of the event has come forth; watch the video for “Whiskey Liver” in the player above. The track comes off the band’s 2014 debut LP, Ripper Killer, and there will be two more videos to follow in the coming weeks.

Drunk Dad will embarrass their hometown with labelmates Hot Victory tonight, May 14th, with a three-city trek through Sacramento, Oakland, and Reno hammering the West Coast next week, on May 21st, 22nd, and 24th, respectively.