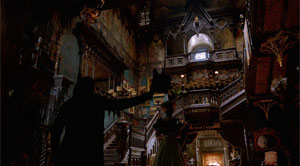 Guillermo del Toro is an amazing director, especially when it comes to Gothic horror. We feel this way because he did a fantastic job with films like The Devil’s Backbone and Pan’s Labyrinth, and even his more mainstream effort, Blade 2, was pretty epic for its time.

Next up is Crimson Peak, which many critics are already considering his Gothic masterpiece. Based on the trailer released earlier today (check it out below), we are starting to believe it’s a masterpiece too. Words can’t really describe how great it looks so far, but unfortunately, we are kind of afraid the story might not be as stunning. Toro’s last effort, Pacific Rim, was uninspiring to say the least. Let’s just hope Crimson Peak doesn’t suffer the same bad storytelling fate as Pacific Rim did.

At the moment, we feel very positive about all aspects of Crimson Peak and we are thrilled to share a fresh batch of photos from the movie, just to show our appreciation.

Check them all out in the gallery above.

When her heart is stolen by a seductive stranger, a young woman is swept away to a house atop a mountain of blood-red clay, a place ﬁlled with secrets that will haunt her forever. Between desire and darkness, between mystery and madness, lies the truth behind Crimson Peak.