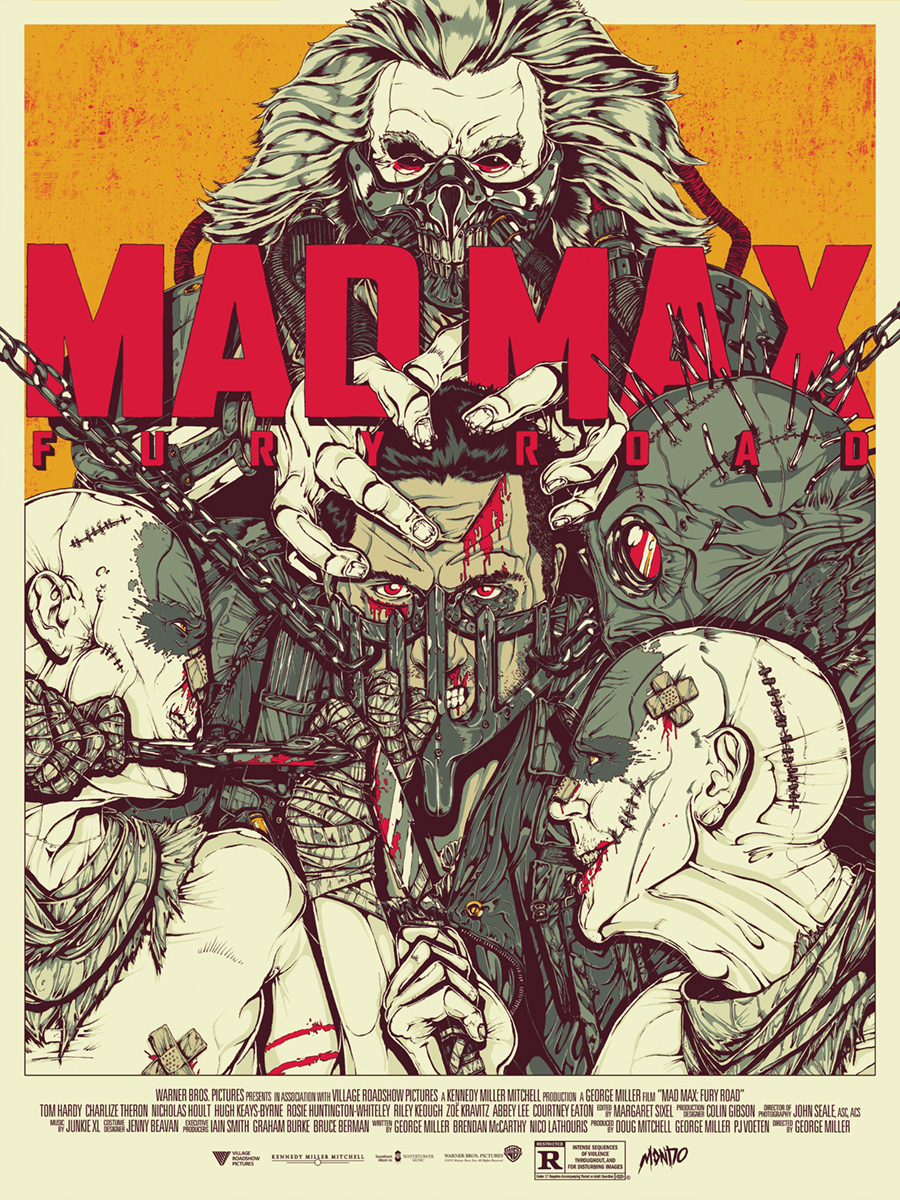 The vinyl comes with two interchangeable covers with artwork by Boneface featuring Max and Fury Road‘s big bad, Immortan Joe. Boneface also contributed a character-focused screen print, which nicely complements Killian Eng’s hellish landscape portrait, featuring an armada of menacing vehicles. The posters will go sale along with a pre-order for the vinyl at MondoTees.com on Friday, May 15th.

The artists had a lot of fun with this one. George Miller’s iconic production design in the Mad Max films has been injected with nitro for Fury Road. His visionary world offered a kaleidoscope of visually arresting characters, vehicles, and landscapes for Boneface and Killian Eng to play in. We were honored for the chance to work on one of our most anticipated films of the summer. Composer Junkie XL used the movie’s vast landscape to explore a diverse range of musical territory, from beating drums to sweeping strings and electric guitar-driven operatic themes, utilizing nearly 200 instruments. “The score includes almost everything in a composer’s arsenal. The instrumentation ranges from big, brutal percussion and an 80-voice choir, with string sections and musical sound design, and everything in between. I used anything I could get my hands on.”

Junkie XL (Tom Holkenborg) has built a reputation on musical experimentation. The Grammy-nominated multi-platinum-selling producer and composer’s versatility puts him on the cutting edge of contemporary music, as well as at the vanguard of film composition. Junkie is able to draw on his extensive knowledge of classical forms and structures while maintaining a connection with popular music. His recent film credits include Divergent, 300: Rise of an Empire, and Run All Night. Junkie XL’s upcoming projects include Batman v Superman: Dawn of Justice and Warner Bros. Point Break, inspired by the classic 1991 hit film of the same name, releasing December 25, 2015. He is teaming with Oscar winning composer Hans Zimmer for Batman v Superman, providing the music for Batman with Zimmer composing the score for Superman in the film. Junkie XL has collaborated with Zimmer on several projects including The Amazing Spiderman 2, Man of Steel, Shark Tale, and one of the highest-grossing films of all-time, Christopher Nolan’s The Dark Knight Rises. He is also currently creating new themes for EA Sports’ prestigious NFL video game franchise Madden ’16.