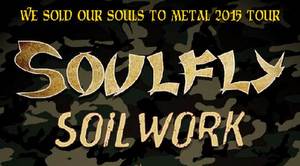 Swedish melodic metal group, Soilwork, and Texas breakout band, Shattered Sun, have today announced that they will join Brazilian/Arizona-local metal icons Soulfly on an internationally inspired North American headlining tour, We Sold Our Souls to Metal 2015 Tour. Things get started on September 30th, in Los Angeles, California! The tour will also feature support from Polish technical death metal band Decapitated. Tickets for all shows go on sale Friday, May 8th, at 10:00 a.m. local time. Meet-and-greet packages will be made available as well. For more info and tickets visit www.soulfly.com.

Headliners Soufly will be supporting their upcoming vicious new release, Archangel, which was produced by Matt Hyde (Slayer, Children of Bodom) and will be released on August 14th, via Nuclear Blast Entertainment. Max Cavalera commented on the tour:

This is a great package and brutal lineup. I personally am a fan of all these bands and it’s an honor to have them touring with us! See you in the pit!

Soilwork and Shattered Sun are both touring in support of recent releases as well, The Living Infinite and Hope Within Hatred, respectively.

Soilwork drummer Dirk Verbeuren offers up his sentiments about joining the tour:

We’re beyond excited to tour North America alongside Soulfly, Decapitated, and Shattered Sun. Is that a kick ass package or what? We’ll be debuting material off our upcoming 10th album as well, so don’t miss us when we come through your town!

We are beyond ecstatic to announce this tour with Soulfly, Decapitated, and Soilwork. Our love for these bands go back to the days we first decided to pick up instruments, from all the way back to the Sepultura days with Max and the first time we picked up a copy of Natural Born Chaos by Soilwork. Both Max and Bjorn have been huge influences in my musical career. To share the stage with them and be a part of this tour is beyond a huge honor for us. Brace yourselves for this amazing line up of metal! See you this fall.