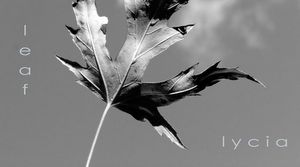 Yesterday, we brought you Black Mare‘s “Low Crimes,” which is a track on the upcoming 7″ split that gets released tomorrow, April 18th. The other band on that split is Lycia, and the airy “Silver Leaf” is their offering for the split. Head on over to Cvlt Nation to stream the new track.

Hailing from Mesa, Arizona, Lycia was initially forged back in the late ’80s, confounding ears with their groundbreaking ethereal darkwave sound conjurings. Heavily reverbed guitars, dark, wraithlike keyboard tones, and ominously programmed drums pushed the Gothic scene forward as their music inspired Nine Inch Nails, Type O Negative, and many within tangential dark, industrial circles. Their 1995 album, The Burning Circle and Then Dust (Projekt Records) remains a cult hit to this day. With “Silver Leaf,” there is no joy, only an eternity to ponder what’s been done. “Silver Leaf” comes about long after summer is gone, “where bright horizons are hard to find.” All that remains is reflection and memory slipping like sand through worn fingers.

The Black Mare/Lycia split will be unleashed on April 18, 2015 (Record Store Day), and is available for pre-order on limited-edition black wax and gray swirl here. Digital lovers can order the split via Magic Bullet’s BandCamp or at iTunes. The title goes immediately out of print after Record Store Day. Exclusive cover art and insert art by the bands themselves rounds out this frostbitten slab of wax.