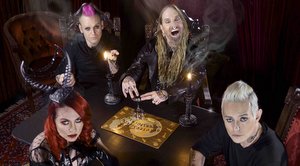 Before DevilDriver there was Coal Chamber, at least for vocalist Dez Fafara. Now Dez is pulling double duty now that Coal Chamber has reformed. News originally broke as far back as August 2014, when the ’90s-era band announced a new album for 2015, and then in December announcing a spring 2015 tour.

Now, Coal Chamber has confirmed May 19th as Rivals‘ official release date, which is their first in over 13 years. As well as the release date, the band has released the cover art (above) and the track listing.

This record was over 13 years in the making and I promise this record won’t disappoint and will be worth the wait! Rivals is solid through and through, there’s maturity and growth in the music while still maintaining the true Coal Chamber sound and delivering track after track of killer tunes! We had a great time working together on this record and I hope you all enjoy it as much as we do! In support of Rivals, Coal Chamber will be on a North American Headline Tour this spring. Support on the tour will come from Filter, Combichrist, and American Head Charge. The tour begins March 6th, in Tempe, Arizona, and runs through April 12th, in Dallas, Texas. Coal Chamber is offering an exclusive VIP Packages for every date on the tour here. The VIP package includes a meet and greet with the band, exclusive t-shirt, exclusive poster, souvenir laminate, and early entry (where applicable).