Mountain Of Wizard Kick Off New Tour On January 6th 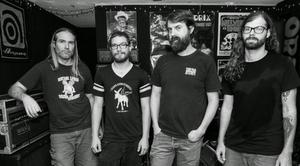 New Orleans instrumental riff conjurers, Mountain of Wizard — who feature within their ranks members of EyeHateGod, Classhole, and Mystick Krewe Of Clearlight — will kick off the new year with a short run of live rituals supporting amplification kings, High On Fire. Set to commence in Birmingham on January 6th, Mountain of Wizard will levy their smoky, bottom-heavy jams upon the ears of West Columbia, Richmond, Brooklyn, Hartford, Portland, Poughkeepsie, and Providence with additional shows to be announced in the weeks to come.

Formed in 2008, Mountain of Wizard worships at the altar of the riff boasting a thick, raging, blues-ridden Bayou swagger inherent to their swampy NOLA surroundings. The band independently released a two-song 7″ last year with a full-length slated to surface later this year via Swedish imprint, Skrammel Records. In the meantime, turn up and tune out to the soul-shrouded sounds of “Sorceror’s Deathbed” in the player above.