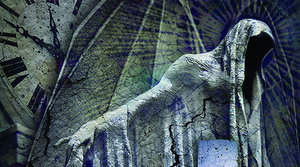 The highly acclaimed and much-loved Alaskan band, 36 Crazyfists, have crafted their own unique blend of metal, post-hardcore, metalcore, and beyond, and revealed the cover art for their new album, Time and Trauma, out February 17th, via Spinefarm Records. You can view the ominous yet beautiful album artwork above.

Pre-order bundles, featuring various merch items and a limited-edition hockey puck, can be purchased here. Also, fans can pre-order the digital album, which includes the instant grat track “Also Am I,” here.

36 Crazyfists will also embark on a headline tour of Europe in February 2015. The tour aligns with the international release of their aforementioned sixth album, Time and Trauma, which marks the band’s debut for new label Spinefarm Records.