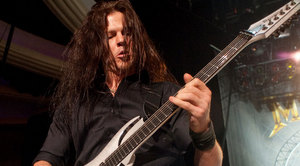 The news surrounding Megadeth lately has been bleak with two members, Chris Broderick and Shawn Drover, announcing their departure last month. Despite assurances from both remaining and founding members, David Ellefson and Dave Mustaine, that Megadeth will be moving forward with a new album and possibly a tour by the end of 2015, nothing is certain.

Nonetheless, Broderick finally broke his silence on the matter in an interview with SiriusXM host Jose Mangin, and some of it, like the possibility of a new band formed between Broderick and Drover, pretty damn exciting. Here’s what the guitarist had to say about his future plans:

Well, one of the things that I’ve always wanted to do is a solo CD, so I’m definitely gonna be working on that in 2015. But one of the things that I’ve really recently become very excited about is, through talking with Shawn Drover, we’ve talked about how we had all this material that was never gonna get released, all these killer, heavy riffs that we had written and stuff, and so we just decided, ‘Hey, why don’t we put the stuff out? Why don’t we form a band and get out these killer riffs, just to see what people think?’ So we formed a band, we’re working with a killer singer — he’s awesome — and we’ve got record labels that have made some good offers on the table, and we’re really excited about where that’s gonna go.

Now that’s awesome and all well and good, but don’t we all want some dirt spilled on the reasons for Broderick’s and Drover’s departures from the band? Broderick also spoke to that, but this is far less exciting and involves absolutely no dirt. In fact, it’s like a nice, clean shirt just back from the cleaners:

It’s not gonna be as exciting as anybody would want. It’s not gonna be some huge drama thing or anything like that. It was simply time. I’d been in Megadeth for seven years and I really wanted to just be able to have that kind of creative freedom to write anything I wanted to, to go anywhere with it that I wanted to and just kind of direct my own course.

The way I kind of think of it is it’s kind of not unlike a chef that works at a restaurant that decides that he wants to open up his own restaurant or maybe a lawyer that wants to start his own firm or something like that. It was a great time to move on. And I think, talking with Shawn, Shawn was in the exact same place. We had talked about it and we had thought about it for a little bit. And so when Shawn quit, it was, like, ‘Whoah! What happened?’ I mean, I knew that we had talked about it, but he did it; he actually just left the band.

Broderick continued about the timing as a thing of respect:

Megadeth is going to be ramping up for their next CD recording cycle and if you’ve got trepidation about being part of something, you don’t wanna commit to that process, the writing process, and then bail on ‘em.

So, now we know. The reasons for Broderick and Drover leaving are pretty ho-hum, but at least it sounds like there are some pretty heavy tunes coming our way from both parties involved!