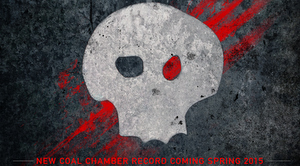 Coal Chamber was recently reactivated, and they’ve just announced a North American Headline Tour for spring 2015. The tour is in support of their forthcoming album that will be released on Napalm Records. Support on the tour will come from Filter, Combichrist, and American Head Charge. The tour begins March 6th, in Tempe, Arizona, and runs through April 12th, closing out in Dallas, Texas.

Coal Chamber is offering exclusive VIP Packages for every date on the tour; pre-sales for those begin tomorrow at this location. The VIP package includes a meet and greet with the band, exclusive t-shirt, exclusive poster, souvenir laminate, and early entry (where applicable). Tickets go on sale to the public beginning this Friday, December 12th, and Saturday December 13th.

Coal Chamber is currently in the studio working on their first studio album in over 12 years. The band is working with producer Mark Lewis (Whitechapel, DevilDriver, Black Dahlia Murder) on the yet still untitled album, which is tentatively slated for a spring 2015 release.