Nikki Sixx Opens A Can Of Worms, Exposes Streaming Compensation 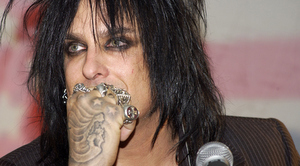 Well, Motley Crue‘s Nikki Sixx doesn’t expose every detail about the compensation awarded to artists when their tracks are streamed, but he does provide a bit of insight. Fact is, we all know that the music industry isn’t fair. Artists aren’t fairly compensated. Fans don’t pay fair prices for products. And record labels aren’t fair about their cut. But nobody does a thing about it. As fans, the power is within our hands, but for change to happen we’d have to do the impossible task of uniting and acting as a single body… and we won’t do that because we’re all too fucking lazy and comfortable with the status quo.

Sixx made two posts regarding this topic on his Facebook page. In the first he addressed the “pink elephant” and described the situation, which included a thing called “breakage,” which basically means that the artists don’t get a cut from streaming revenue. Sixx was careful not to just call out Spotify, but to also include YouTube. Here’s his first post:

I’d like to talk about the pink elephant in the room for a minute.
A lot of artist’s are talking about Spotify right now and some might say its because they have new albums out. It could also be considered a good marketing tool because to be honest with you, it gets picked up a lot in the press. Just to be clear I too have a new album out and a new video for Sixx:A.M Any smart artist should know how to use the internet just like Bono, Taylor Swift and Dave Grohl are right now but that being said the pink elephant in the room is that YouTube is playing all of their music and they aren’t getting paid for it. They are making even less money from YouTube than Spotify so let’s not just target Spotify here.
A big unaddressed issue (and more important in my opinion) is that artists aren’t getting paid because of a term called “BREAKAGE”. That’s where the record companies have equity or take advances from the different streaming companies and never recoup them. Thus, never paying the Bono’s, Taylor’s, Dave’s and many, many, more. These artists should really be talking about that. But I think they may not know or are afraid that their labels (or distribution companies) won’t promote them if the tell that “dirty little secret.”
Also what are we doing to help new artists? We were all new artists once too. We’ve been around long enough that we should be addressing these issues to help new artists; exposing the things that are more than just roadblocks, the things that are actually sinkholes.
I don’t understand why the press never writes about it but hopefully they will start talking about breakage and how new artists can get more exposure. We have the power as the artists to raise awareness and change the future of the music business. Let’s use our brains to not only promote our music but to address the pink elephant in the room…
Nikki Sixx

Sixx was then flooded with responses, and probably more questions that anything. The next step for him was to detail what “breakage” is and to make a call to action for the media and artists to investigate and to expose the practice. Here’s his second post:

The business of streaming music for artists.
I wanna break this down into simple terms for everybody since I’ve been getting calls from press and artists. This can be confusing and I believe clarity is important. So here it goes.
A record label signs an artist to a recording contracts to sell their music at different destinations.
An example of that would be a one stop-shopping destination like iTunes where you can download music. They also license the music to streaming companies like Spotify etc. When they do that they get around 70% of the money. Now on downloads (just like on hard good’s i.e. CD’s etc) they pay a royalty to the artist but on streaming they don’t. They use a legal loophole called “Breakage” and they get advances, which they don’t recoup and hence don’t pay the artist.
This is something artist lawyers need to address. They need to be strong and protect the artist and not the labels. We should all get paid for our music and force an honest payment plan that will ensure new artist’s have a future as well as established artist’s who should also get paid for there whole catalog. Some might say the bigger artists have made enough money but that being said we still wrote the music, performed the music and promoted the music. But what about the new bands, singers, and songwriters? If we continue allowing this one-sided business model to continue they really don’t have a hope in hell do they? I’d like ALL artist’s to do what their manager’s and lawyers for the most part haven’t done and stand up and force a change…I still don’t understand why a majority of reporters haven’t investigated and report this in a robust way.

So what do you think? What are you going to do?