Gustafsson vs. Johnson Officially Set To Headline UFC on FOX 14 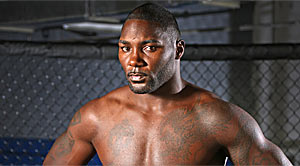 Soon after the judge dismissed Anthony Johnson’s (18-4) domestic abuse case last week for past allegations, the UFC was quick to welcome “Rumble” back into the light heavyweight division. On Wednesday, UFC President Dana White announced that Johnson is now tapped to face No.1 contender Alexander Gustafsson (16-2) in Sweden on January 24, 2015, for the main event at UFC on FOX 14.

Both fighters sound thrilled about the five-rounder that will take place in the Tele2 Arena in Stockholm, which holds 30,000 seats. Johnson said he isn’t intimidated to fight in Gustafsson’s hometown:

This fight might be on his home turf, but I’m ready to go over to Sweden and prove that I’m the next in the line for the UFC light heavyweight title, I’m not intimidated by fighting in front of Alex’ hometown fans. I’m going to go in there and look for the knockout like I do in all of my fights. I can’t wait for this!

Gustafsson is just thinking about UFC gold, and less of Johnson:

This is going to be an epic event, I want more than 30,000 fans to come and witness me win on January 24th. Then I’m going to go and get the title! My journey back to the top starts now.

The event will be broadcasted LIVE on FOX Sports 1 (Sportsnet 360 in Canada).